Warning, I'm being rather philosophical today! 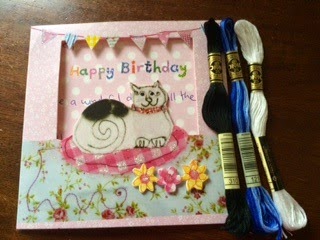 It seems way too soon, but today I am officially a senior citizen! Understand, I am not one to get fussed over birthdays - they show up every year and you can't stop them, so you might as well enjoy them (or ignore them). But I've been thinking a lot about this one - maybe because it's a watershed one or maybe because there have been a couple of major changes in the last few years.

First one - in March of 2010 I was told I had breast cancer. I was one of the lucky ones - my yearly mammogram caught it very early while it was still tiny and hadn't spread anywhere. So, a modified mastectomy. a couple of months of daily radiation and in September of that year I was told "All clear. Go home and live your life". There have been 2 scares since then that turned out to be nothing serious and I'm 4 months away from 5 years cancer free and being an official survivor.

Second one - for more decades of my life than I care to admit, I've been morbidly obese. Not just fat, morbidly obese. An ugly phrase. I had all the problems associated with carrying that much weight - high blood pressure, high cholesterol, Type II diabetes, hips, knees and ankles that had me in constant pain and I was a walking pharmacy - 15 pills a day spread over 9 different medications and that doesn't include pain pills. (Not good for the budget either!)  In February of last year my doctor sent me to a bariatric specialist who said he wouldn't do the surgery on me because he didn't believe I was capable of changing my eating habits. I was devastated. When I got home, I decided to prove him wrong and in March I joined Weight Watchers online - had no choice, there are no meetings here where I live. Something clicked. So, today as I turn 65 I am 87 pounds lighter, I take 7 pills a day over 4 medications. One of those will stop in September when I hit my 5 year cancer free mark. I am still classified as morbidly obese, but I now believe I can get myself out of that.  And I can walk again! I'm looking forward to what I believe will be some of the best decades ever.

Life, whatever you have planned for me, bring it on! I'm ready.
Posted by Bea at 2:36 PM

Happy Birthday, Bea, such an inspirational story. I hope that you have a great day and many, many more years of being a blogger, a stitcher and a great friend. love Kaye xoxoxo

One day late, but I wish you all the best for your birthday. I think you're doing pretty well with loosing weight, keep going on!
Evelien, Holland

Hi Bea, I hope you had a great birthday. Thank you for sharing your story with us, and its truly inspirational what you have managed to achieve, and you should be extremely proud of yourself. I have often read peoples weightloss stories and they talk of something just clicking....I'm waiting fo that...lol! I hope by your next birthday you will be on even less pills x

Oh my goodness: You are a very lucky and wise Lady, how lucky you are to have the courage to do it almost alone, I am about 50 over weight, I am encouraged by this wonderful post.
Good luck to you, please keep us updated.
Cancer is ugly, I am a survivor 21 years (ovarian)
A wonderful Happy Birthday to you, I turn 65 next january I am looking forward to it and retirement.

Happy Birthday and Hugs to you.

Happy birthday, and well done on your amazing weightloss! I know from watching my sister and her husband how hard it is to loose a lot of weight on your own, so well done and keep up the good work!!

Great story and happy birthday! Weight loss seems to be something one has to decide for themselves. Go go go!! :D

Happy belated birthday and CONGRATULATIONS on loosing these pesky pounds. Honey you can do it! I am fighting my weight too...

Happy Belated Birthday! Enjoy being a Silver Surfer or a YAP as my friend Alf used to say - he was a Young Aged Pensioner because he was young at heart!
Well done on the weight loss too. Slow and steady is the healthiest way to do it.