It is so cold here and has been for about a week now. Today we have a wind chill of -21. I know, I know, it's a lot worse in other parts of the country, but this is unheard of for us, especially over an extended length of time. And it looks like it's going to stay like this at least until next Sunday.

I finally have my new computer set up and while there are still a few things to iron out, the basics are all up and running. The friend who gave it to me is going to see if she can tweak it the next time she visits (probably Tuesday night) and if not we'll get her son to look at it. It's nice to have friends with children who are part of the computer generation! It is soooo nice to be working with a full size keyboard again. Karen has taken her Netbook home with huge "thank you"s. I would have been lost without it.

I finished the last of my mouse pad inserts. 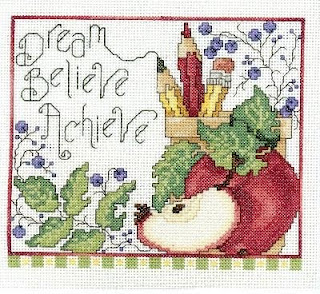 It's another Stoney Creek pattern. I got them all packaged up and in the mail on Friday, so hopefully they will arrive at their new homes sometime this week.

Michelle took me out for our end of the month lunch today and I had breakfast for lunch. Some days you just gotta feed that hash brown craving. LOL

The City in the Sea

Lo! Death has reared himself a throne
In a strange city lying alone
Far down within the dim West,
Where the good and the bad and the worst and the best
Have gone to their eternal rest.
There shrines and palaces and towers
(Time-eaten towers that tremble not!)
Resemble nothing that is ours.
Around, by lifting winds forgot,
Resignedly beneath the sky
The melancholy waters lie.

No rays from the holy heaven come down
On the long night-time of that town;
But light from out the lurid sea
Streams up the turrets silently--
Gleams up the pinnacles far and free
Up domes--up spires--up kingly halls--
Up fanes--up Babylon-like walls--
Up shadowy long-forgotten bowers
Of sculptured ivy and stone flowers--
Up many and many a marvellous shrine
Whose wreathed friezes intertwine
The viol, the violet, and the vine.

Resignedly beneath the skky
The melancholy waters lie.
So blend the turrents and shadows there
That all seem pendulous in air,
While from a proud tower in the town
Death looks gigantically down.

There open fanes and gaping graves
Yawn level with the luminous waves;
But not the riches there that lie
In each idol's diamond eye--
Not the gaily-jewelled dead
Tempt the waters from their bed;
For no ripples curl, alas!
Along that wilderness of glass--
No swellings tell that winds may be
Upon some far-off happier sea--
No heavings hint that winds have been
On seas less hideously serene.

But lo, a stir is in the air!
The wave--there is a movement there!
As if the towers had thrust aside
In slightly sinking, the dull tide--
As if their tops had feebly given
A void within the filmy Heaven.
The waves have now a redder glow--
The hours are breathing faint and low--
And when, amid no earthly moans,
Down, down that town shall settle hence,
Hell, rising from a thousand thrones,
Shall do it reverence.


"fanes" are temples
Posted by Bea at 3:54 PM No comments: Links to this post

Well, some wretch has ordered more snow! Coming down thick enough that I can't see the other side of the harbour. Very glad I don't need to go any where today.

Went to my Cancer Support lunch yesterday. It's always so worthwhile. we have two members going through chemo at the moment and they seem to find a lot of strength in listening to the ladies who are now 19 or 23 years cancer free. Found out that the hospital will be getting a digital mammography machine - apparently they will be the new provincial standard.
Posted by Bea at 10:02 AM No comments: Links to this post

Well, this is the weekend I don't work at Sisters on Saturday, so I will be thoroughly enjoying 4 days without the alarm.

Got in several hours of stitching at Sisters yesterday and then after supper as well. I was determined to finish the leaves and just stayed with it until they were done - at 0130 this morning!! It was worth it - just the berries and the back stitching to do.

Round the cape of a sudden came the sea,
And the sun looked over the mountain's rim:
And straight was a path of gold for him,
And the need of a world of men for me.

A line in long array, where they wind betwixt green islands;
They take a serpentine course-- their arms flash in the sun-- hark to the musical clank;
Behold the silvery river--in it the splashing horses, loitering, stop to drink;
Behold the brown-faced men--each group, each person, a picture--the negligent rest on the saddles;
Some emerge on the opposite bank--others are just entering the ford--while,
Scarlet, and blue, and snowy white,
The guidon flags flutter gaily in the wind.

Well, I was coming down with something - a head cold. Just enough to be sniffly with a fuzzy/foggy feeling head. And still having trouble getting warm. Bah humbug!!!!!

Thus piteously Love clove what he begat:
The union of this ever-diverse pair!
These two were rapid falcons in a snare,
Condemned to do the flitting of a bat.
Lovers beneath the singing sky of May,
They wandered once, clear as the dew on flowers:
But they fed not on the advancing hours:
Their hearts held cravings for the buried day.
Then each applied to each that fatal knife,
Deep questioning, which probes to endless dole.
Ah, what a dusty answer gets the soul
When hot for certainties in this our life!--
In tragic hints here see what evermore
Moves dark as yonder midnight ocean's force,
Thundering like ramping hosts of warrior horse,
To throw that faint thin line upon the shore!

So much for hearts and roses and true love! LOL
Posted by Bea at 1:31 PM No comments: Links to this post

Not sure what is going on - for 3 days now I have not been able to get warm. Hope I'm not coming down with something.

"I felt a Funeral, in my Brain"

I felt a Funeral, in my Brain,
And Mourners to and fro
Kept treading--treading--till it seemed
That Sense was breaking through--

And when they all were seated,
A Service, like a Drum--
Kept beating--beating--till I thought
My Mind was going numb--

And then I heard them lift a Box
And creak across my Soul
With those same Boots of Lead, again,
Then Space--began to toll,

As all the Heavens were a Bell,
And Being but an ear,
And I, and Silence, some strange Race
Wrecked, solitary, here--

And then a Plank in Reason, broke,
And I dropped down, and down--
And hit a World, at every plunge,
And Finished knowing--then--

I did all my "must do" things yesterday so today is a lovely whatever day. Finished "Lean Mean Thirteen" and "Plum Lucky" and now "Fearless Fourteen" is on deck. I know I've said it before, but I like Janet Evanovich's Stephanie Plum stories!

Woman much missed, how you call to me, call to me,
Saying that now you are not as you were
When you had changed from the one who was all to me,
But as at first, when our day was fair.

Can it be you that I hear? Let me view you, then,
Standing as when I drew near to the town
Where you would wait for me: yes, as I knew you then,
Even to the original air-blue gown!

Or is it only the breeze, in its listlessness
Travelling across the wet mead to me here,
You being ever dissolved to wan wistlessness,
Heard no more again far or near?

Thus I; faltering forward,
Leaves around me falling,
Wind oozing thin through the thorn from norward,
And the woman calling.

Did not sleep well last night, so it's a rather blah day.

Out of me unworthy and unknown
The vibrations of deathless music;
"With malice toward none, with charity for all."
Out of me the forgiveness of millions toward millions,
And the beneficent face of a nation
Shining with justice and truth.
I am Anne Rutledge who sleeps beneath these weeds,
Beloved in life of Abraham Lincoln,
Wedded to him, not through union,
But through seperation.
Bloom forever, O Republic,
From the dust of my bosom!

Well, it was 'weigh day' yesterday and I got rid of 4 of the 10 pounds I gained over the holidays. Now that felt good!

Was at my second physio session as well. It's an initiative of the BC Cancer Agency to try and combat the loss of strength and mobility that a lot of women experience after cancer surgery, especially, in breast cancer, on the side where the lymphnodes are removed. We do a lot of stretches and some exercises using small weights. It doesn't seem like a lot but my shoulders definitely know they have been worked when we're done.

Monday Michelle and I went for our monthly lunch and ended up at Breakers (http://www.breakerspub.ca) where the food was as good as always. I had their beef and barley soup - I could have eaten several more bowls of it!

tortures the biggest hulls, the best man knows
to pit against its beatings, and sinks them pitilessly.
Mothlike in mists, scintillant in the minute

brilliance of cloudless days, with broad bellying sails
they glide to the wind tossing green water
from their sharp prows while over them the crew crawls

ant-like, solicitously grooming them, releasing,
making fast as they turn, lean far over and having
caught the wind again, side by side, head for the mark.

In a well guarded arena of open water surrounded by
lesser and greater craft which, sycophant, lumbering
and flittering follow them, they appear youthful, rare

as the light of a happy eye, live with the grace
of all that in the mind is feckless, free and
naturally to be desired. Now the sea which holds them

is moody, lapping their glossy sides, as if feeling
for some slightest flaw but fails completely.
Today no race. Then the wind comes again. The yachts

move, jockeying for a start, the signal is set and they
are off. Now thw waves strike at them but they are too
well made, they slip through, though they take in canvas.

Arms with hands grasping seek to clutch at the prows.
Bodies thrown recklessly in the way are cut aside.
It is a sea of faces about them in agony, in despair

until the horror of the race dawns staggering the mind,
the whole sea become an entanglement of watery bodies
lost to the world bearing what they cannot hold. Broken,

beaten, desolate, reaching from the dead to be taken up
they cry out, failing, failing! their cries rising
in waves still as the skillful yachts pass over.