Well, if it had snowed a little today, we would have had all four seasons. Woke up this morning to furious winds that were pelting rain against my windows, then that eased off and we had some thunder and lightning followed by a downpour of hail. My cat was not impressed by all the noise - she kept checking the doors to see what was trying to come in. Now the clouds have broken up and we have some blue sky and sunshine. A nice change from the last two days of wind and heavy, heavy rain. Mind you, after watching the news from Southern California, I'm not going to complain too much. I suspect they would give anything to have all our wet. It's such a horrific time they are going through.
Posted by Bea at 2:01 PM No comments: Links to this post 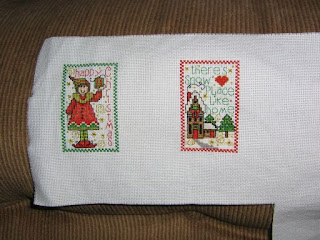 It's definitely a day for staying in and looking at the weather. It's blowing between 70 and 90 km/hr (up to about 60 mph) and the harbour is a mass of whitecaps, water whirls and walls of spray. It's wonderful to look at, but most of the boats out there are having a bad time of it. Watched a smallish boat try to come out of Dodge Cove and after about 10 minutes just turned around and went back in. Tasha is on her front window perch growling at the leaves as they whirl by and hissing every time the rain hits the window. She's going to be very worn out by the end of the day - there's something up to 150 mm predicted for today (about 6"). Definitely a good day for reading or stitching. I've just finished the fronts for a couple of ornaments and working on the next one.
Posted by Bea at 1:50 PM No comments: Links to this post

Ever notice how memories can be triggered by unexpected things? I was wandering around a favourite website (http://dragondreams.accra.ca/) a few days ago and came across an illustration of a little winged creature under a mushroom which made me think of the opening line of a poem I had read eons ago in school "Under a toadstool crept a wee elf, out of the rain to shelter himself" and there I was stuck - couldn't remember any more of it except that it had a rather cute ending. So, the search was on and I finally found it. It's by Oliver Herford entitled The Elf and the Dormouse.

"Under a toadstool crept a wee Elf,
Out of the rain to shelter himself.

Under the toadstool, sound asleep,
Sat a big Dormouse all in a heap.

Trembled the wee Elf, frightened and yet
Fearing to fly away lest he get wet.

To the next shelter -- maybe a mile!
Sudden the wee Elf smiled a wee smile.

Tugged till the toadstool toppled in two
Holding it over him, gaily he flew.

Soon he was safe home, dry as could be.
Soon woke the Dormouse -- 'Good gracious me!

Where is my toadstool?' loud he lamented.
--And that's how umbrellas first were invented."
Posted by Bea at 1:36 PM No comments: Links to this post 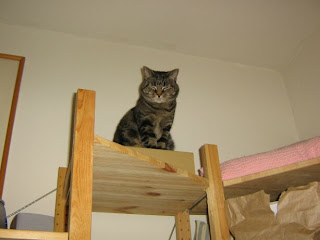 Well, this is a new venture. I've kept a dairy for years, but I thought I would try something new. I live in a coastal city and am lucky enough to have gorgeous views of our harbour out my living room window. I share my space with a very spoiled cat named Tasha who spends a lot of time sitting on a shelf above my computer peering down at me. I do wonder at times what goes through that little feline brain of hers!
Posted by Bea at 3:11 PM No comments: Links to this post