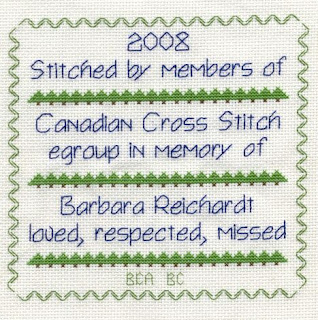 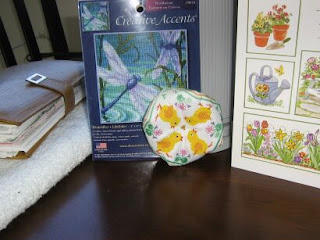 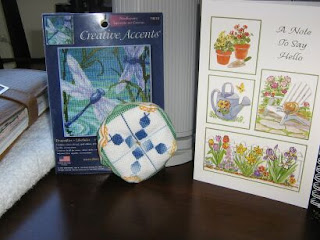 Well, it's been a busy couple of weeks and once again the time has flown. I've been helping friends with reception duties at their PACE fitness club and it's turned into more hours than originally planned. I'm enjoying it immensely, but I'm far too old to be getting up at 0430 in order to have the doors open at 0600 (or at least I FEEL far too old when the alarm goes off!!). Thank goodness I don't get the 0600 to 1000 shift more than a couple of times a week.

Have been busy stitching of course. I just finished a dedication square for a quilt (image on the top). I created the square using an alphabet from a Leisure Arts soft-covered book '120 Alphabets' and the border and trees from another Leisure Arts soft-covered book 'Words To Remember'. The cross stitch egroup I belong to had one of our members pass away unexpectedly last fall and we're stitching squares that will be made into a quilt and given to her husband. We really want him to know how much the group misses her.

This same group had an Easter Exchange and I showed in an earlier blog the little mini-pillow ornament that I made as my giving part of the exchange. I received the cutest biscornu as my receiving part of the exchange. Isn't it so cute? (Bottom two images.) The odd shape comes because when you sew the front square to the back square, you attach a corner to the centre of a side and join from there. You're supposed to use it for a pin cushion, but I think it's much too pretty to stick pins in.
Also been doing some reading (always) - mostly in "Chicken Soup for the Cat Lover's Soul" but also found another fun poem - one I remember my dad reading to me when I was little. It's by Eugene Field and it's called
The Duel
The gingham dog and the calico cat
Side by side on the table sat;
'Twas half-past twelve, and (what do you think!)
Nor one nor t'other had slept a wink!
The old Dutch clock and the Chinese plate
Appeared to know as sure as fate
There was going to be a terrible spat.
(I wasn't there; I simply state
What was told to me by the Chinese plate!)
The gingham dog went "bow-wow-wow!"
And the calico cat replied "mee-ow!"
The air was littered, an hour or so,
With bits of gingham and calico,
While the old Dutch clock in the chimney-place
Up with its hands before its face,
For it always dreaded a family row!
(Now mind: I'm only telling you
What the old Dutch clock declares is true!)
The Chinese plate looked very blue,
And wailed, "Oh, dear! what shall we do!"
but the gingham dog and the calico cat
Wallowed this way and tumbled that,
Employing every tooth and claw
In the awfullest way you ever saw --
And, oh! how the gingham and calico flew!
(Don't fancy I exaggerate --
I got my news from the Chinese plate!)
Next morning, where the two had sat
They found to trace of dog or cat;
And some folks think unto this day
That burglars stole that pair away!
But the truth about the cat and pup
Is this: they ate each other up!
Now what do you really think of that!
(The old Dutch clock it told me so,
And that is how I came to know.)
Posted by Bea at 4:57 PM No comments: Links to this post

Looking for the 'Why'

I had just finished reading Edwin Markham's poem The Man With The Hoe which is a rather dark piece and wondered what had made him write it when I noticed a footnote that said it was inspired by a painting by Millet, also called The Man With The Hoe. I didn't remember ever seeing the painting, so I googled it and the reason behind the gloom of the poem made sense. Both picture and poem can be found here - it's worth a read. 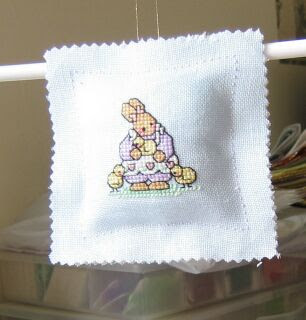 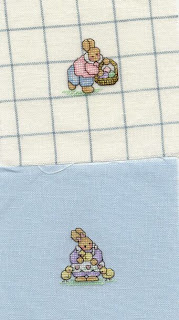 Well, I've spent the last couple of weeks reading and stitching on my Easter exchange item. The exchange item, a mini-pillow ornament is done and will be in the mail tomorrow, a couple of days ahead of the deadline. Now that's a bit of an improvement. As you can see by the pictures though, I'm going to have to do some work on my indoor photography skills. Somehow I've managed to make the blue fabric look white on the finished pillow. The picture of the front and back of the stitching is a scan and that shows the colours of the fabric as they really are. I just hope the receiver of my effort likes it.
Have done a fair bit of reading as well. It's been wet and windy here for almost the entire time between my blogs, which is ideal reading weather. Mind you, I'm not complaining when I see what the centre of Canada and the east coast are having to deal with. A bad rain and wind storm is a piece of cake compared to snow and wind. After all, what's the downside of a good book, curling up under an afghan and a cat at your feet? The books have all been mystery short stories and have carried me through 16th century Scotland, Victorian London and 20th century North America and Europe.
And of course, poetry. Found a couple of A.E. Housman poems that stuck with me.
On Wenlock Edge
On Wenlock Edge the wood's in trouble;
His forest fleece the Wrekin heaves;
The gale, it plies the saplings double,
And thick on Severn snow the leaves.
'Twould blow like this through holt and hanger
When Uricon the city stood:
'Tis the old wind in the old anger,
But then it threshed another wood.
Then, 'twas before my time, the Roman
At yonder heaving hill would stare:
The blood that warms an English yeoman,
The thoughts that hurt him, they were there.
There, like the wind through woods in riot,
Through him the gale of life blew high;
The tree of man was never quiet:
Then 'twas the Roman, now 'tis I.
The gale, it plies the saplings double,
It blows so hard, 'twill soon be gone:
To-day the Roman and his trouble
Are ashes under Uricon.
Into My Heart An Air That Kills
Into my heart an air that kills
From yon far country blows:
What are those blue remembered hills,
What spires, what farms are those?
That is the land of lost content,
I see it shining plain,
The happy highways where I went
And cannot come again.
Posted by Bea at 2:26 PM No comments: Links to this post