Not A Good Thursday


On Tuesdays and Thursdays I have a part time job - I man the desk (or is that woman the desk, to be horribly PC, which I'm not) at a workout business called Sisters - women only obviously. I quite enjoy it except for the fact that we open at 6 a.m., so I have to be up at 4 to be there by 5:45 so I can have everything ready when the first ladies arrive at 6. And yes, there really are women  - a lot of them - that show up that early to work out!

Not being a true morning person (my opinion is that if we were a truly civilised society, nothing would start before 10) I'm not at my best these mornings, so you can imagine my reaction when I arrived and found this: 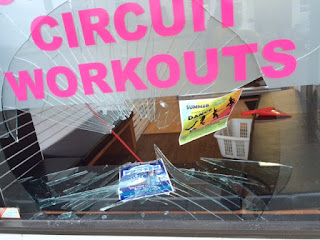 Have no idea exactly how it was broken as there was no rock or brick or anything else on the inside - just a large amount of shattered glass everywhere. 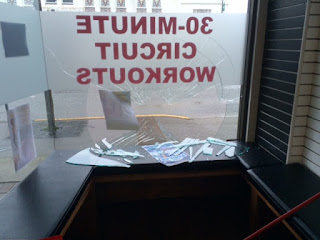 I didn't think to take a picture before I had cleaned up most of it - was over the whole bench, the floor and even the treadmills which are behind me as I take this picture.

So, even before I was dealing with clients, I had to phone the R.C.M.P. (who think there may have been a fight and somebody got thrown against the window, HARD), text my boss who was out of town and talk to the insurance,company where I found out the window isn't covered under our insurance because we don't own the building, so that meant tracking down the landlord. He didn't show up until 3 p.m., then the glass company arrived about 20 minutes later, just as I was leaving.

It was a cold, rainy, miserable day and I almost froze as I sat there for those 9 hours - thank goodness for electric blankets and cats that like to snuggle when I got home. I was NOT a happy camper. On the plus side, the clients rather liked all that fresh, wet air that was blowing in - nobody needed the fans on, which is something they always ask for as they get too hot while exercising. Got to be a silver lining, right?
Posted by Bea at 4:30 PM

o my, it almost looks like someone punched the glass! Unfortunate that you had to sit in it but I bet that air felt wonderful for the clients! I'm glad they were able to fix it that day.

That all doesn't sound like fun but a bit of excitement, I suppose!

That is quite annoying though, all the effort you go to as you aren't a morning person, and someone makes it even tougher for you! At least it made the day more interesting??? and maybe the time passed quicker?? but you are right to always look for the silver lining :D

What a terrible thing to happen! I am glad that you could see the silver lining though.