Moved, yes. Settled, that's still a future declaration. But, the rooms needed to function are set up and clear of boxes and there is a world of work wrapped up in that phrase.

I got the bedroom done first - I usually do that so when I've had enough I can just collapse. 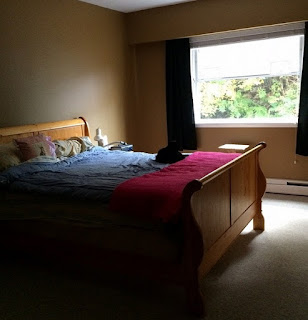 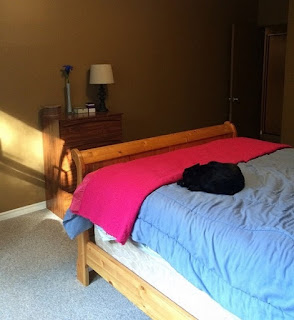 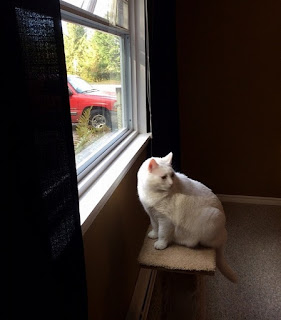 And as you can see, the furries are here and that makes the place feel much more like home. They were at the shelter for 9 days and I missed them horribly.

Then I got the bathroom set up and that was pretty much it the first day I was here.

The next day I started on the kitchen and that pretty much used up two days, but everything is in cupboards and pantry. There will probably be some finessing, but so far so good. 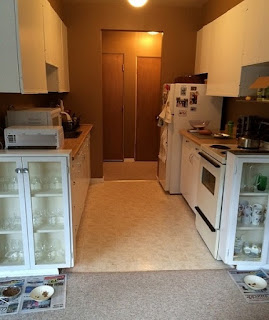 Then I did the dining area. 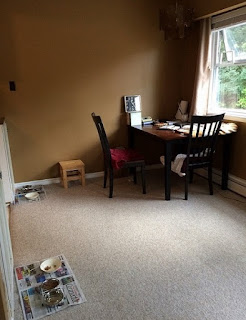 I know there will be some changes here, but right now it's functioning so it'll be left.

And then on to the living room. 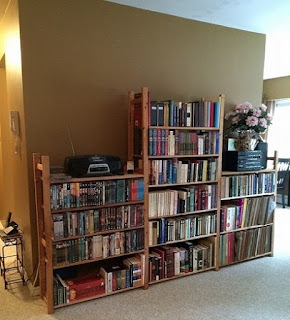 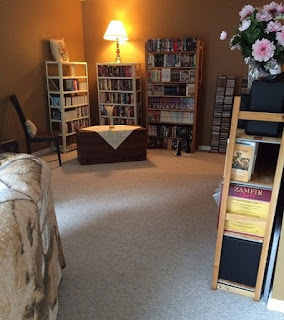 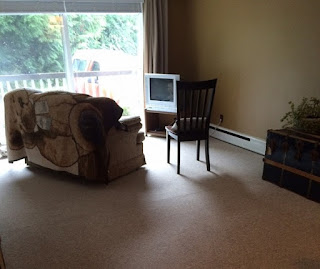 And the bags and bags of stuff that have gone to recycling, the dump and the Salvation Army I don't even want to think about. As you can see, there is nothing on the walls yet, so it feels rather temporary still. As I decide where to put all my pictures/stitching it'll feel much more like mine.

And that leaves the office and craft room and I don't even want to think about them. They are both packed to the hilt with totes, full boxes, empty boxes and stuff I couldn't make up my mind where to put it. I suspect the office will be first - I need to do my job after all, Then the craft room. But, I have found my bag with my current project - the Christmas Ornie SAL - and my UFO, so I'm hoping the needle will start to fly again tomorrow.

I've lost my gorgeous ocean view, and look at a cliffside now, but I've already had a couple of visitors. 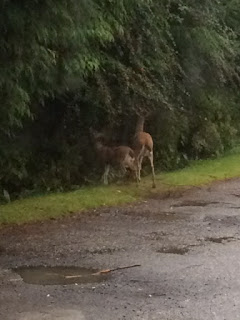 Your new apartment looks to be very nice and roomy. How fun to be able to watch deer outside.

I'm so glad that you are starting to feel at home and that your furbabies are back with you! You have done so well with all the unpacking - impressive!! Enjoy getting back into stitching again:))

Beautiful sights out your window!

Yay! Great to have you back and what a lovely place! It looks like you have a great amount of room and hope the rest of the unpacking goes smoothly.

I hope you will be very happy in you new home.
Nice visitors that came along to welcome you.

Oh my goodness, a move, I do not like your X landlord, what a stinker, but that's me speaking.
I hope all goes well for you and your babies, they even helped you unpack so cute.
Looks like loads of room in this place.

Thank you for commenting in my ornie sal post.
I liked your pictures. I love pictures of houses. Specially canadian houses! I love Canada!

Your new apartment looks lovely and spacious. I'm glad to see you have got your books and music all sorted out.
And new wildlife too!

Love the new apartment! As long you and the cats are settled.... the rest of the unpacking will eventually happen!!
Hugs xx

It looks like a great apartment, Bea, you are well on the way to being settled. I love the deer, too!