Not a lot done on the crafting front, but Retirement Means has gone from here 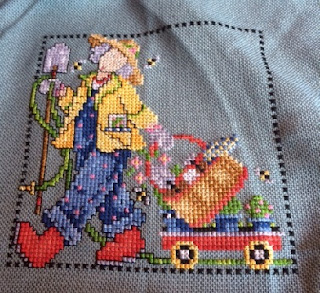 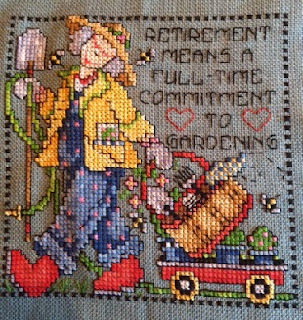 It's done, except I've decided to do beads instead of French knots so have to wait for them to arrive. I had thought I was done a bit earlier, but as I was looking it over I realised I had missed the second E in Retirement, so had to frog and redo. I was not happy with me at that point.

The doll outfit went from here 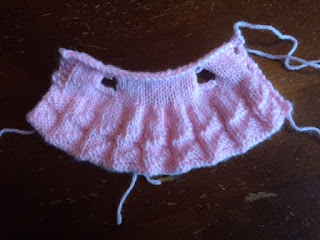 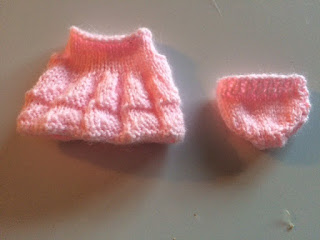 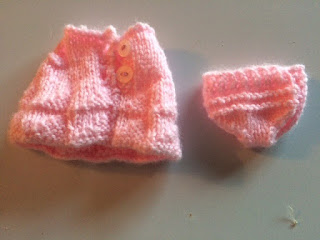 plus booties that need to be sewn up. 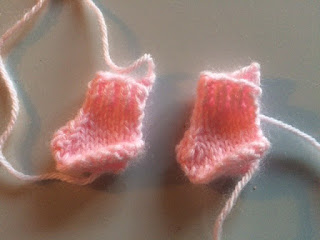 Then a hat with a bow and outfit #1 will be done.

Thank you everyone for your kind words about my friend's husband. He had open heart surgery on Monday where a planned double bypass became a quadruple on the operating table. Surgery went fine, but he reacted badly as he started to wake up and they had to heavily sedate him to control heart and blood pressure. Today he is improving steadily and hopes to be out of cardiac ICU either tomorrow or Friday.
Posted by Bea at 11:25 PM

Retirement looks lovely & what a great idea to use beads instead of French knots!
I can't wait to see what you will be stitching next.

Oh hurry up beads!! It looks great! What a sweet, little outfit you have almost completed.
That is so scary with your friend's husband! I am glad he is doing much better now.

Wohoo almost done. It sure looks cute! Love the doll outfit too. Too cute!! Thanks for the update on your friend's hubby. Hope he is fully recovered soon.

All your work looks great and I'm glad your friend's husband is getting better!

Beautiful work on Retirement and it's so close! Those spelling frogs are the worst..

Love the doll clothes, and so glad to hear your friend"s husband is improving.

Oh my gosh the wording is wonderful, this is such a cute design.
I have made so many mistakes with spelling and of course the frog makes his appearance.
So happy your Friends Husband is doing better, Mike had triple bypass in July, it is a life changing experience, but for the good

Retirement is a lovely design. I'm glad to hear your friend's husband is making progress. That kind of surgery is difficult I'm sure.

Pull the other thread said...

Retirement looks great, sorry to hear you had to rip it back for the e but we'll done on the first, before the beads. Love the dolls outfit, so cute! Glad to hear you friends husband is recovering.

Retirement looks fantastic.
Worrying times for you all {{hugs}}

Retirement looks lovely. Pretty little outfit for the doll too.

Retirement looks great and so close to a finish. Oh I love the cute doll clothes.

Retirement is looking lovely !! The dolls clothes are very cute:)

Hope you don't have to wait too long for the beads! the dolls clothes are gorgeous!

Lovely design and finished except for the beads. I love the colours and the doll´s clothes are pretty,

Retirement looks great ..... it was a shame the frog visited, but you rectified it well! I hope the beads arrive soon!
The dolls outfit is very sweet and I'm sure it won't take long to finish!
So relieved to hear your friend's husband is improving!
Hugs, Barbara x

Retirement means looks fabulous and I, too, often like to substitute beads for French knots - they often look much better. Good to hear that your friend's husband is doing better.

Oh no I missed your update last week! :/

So glad to hear about your friend's husband! I hope he is still improving and either home or on his way there. Retirement looks awesome, hope your beads arrived!!

Look forward to seeing Retirement done with the beads.

Ooh, yeah, I had a couple of embarrassing misspellings on a sampler I designed. At least you caught it in time!