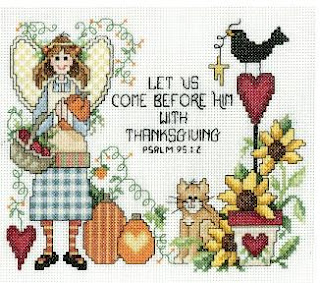 This is my latest cross stitch finish - Autumn Angel. It's a Stoney Creek pattern - another insert for a mouse pad and the last of the series of the seasons.

Spent some time doing physio yesterday afternoon - I've lost a little mobility in the arm where my lymphnodes were removed in March and they're trying to bring back as much as possible. Interesting experience. The exercises seemed simple enough, but there was a little ache last night as I was stitching. It's all gone today though.

And spent more time in the hospital this morning getting labwork done. I see my doctor every 3 months to get my meds renewed and I have to have the labwork done before every visit so he can see if there are changes needed. I swear I'm on a first name basis with all the lab staff!

Know then thyself, presume not God to scan,
The proper study of mankind is Man.
Placed on this isthmus of a middle state,
A being darkly wise and rudely great:
With too much knowledge for the Sceptic side,
With too much weakness for the Stoic's pride,
He hangs between; in doubt to act or rest,
In doubt to deem himself a God or Beast,
In doubt his mind or body to prefer;
Born but to die, and reasoning but to err;
Alike in ignorance, his reason such
Whether he thinks too little or too much:
Chaos of thought and passion, all confused;
Still by himself abused, or disabused;
Created half to rise and half to fall;
Great lord of all things, yet a prey to all;
Sole judge of truth, in endless error hurled;
The glory, jest, and riddle of the world!
Go, wondrous creature! mount where science guides:
Go, measure earth, weigh air, and state the tides:
Instruct the planets in what orbs to run,
Correct old time and regulate the Sun;
Go, soar with Plato to th' empyreal sphere,
To the first good, first perfect, and first fair;
Or tread the mazy round his follow'rs trod
And quitting sense call imitating God--
As Eastern priests in giddy circles run,
And turn their heads to imitate the Sun.
Go, teach Eternal Wisdom how to rule:
Then drop into thyself, and be a fool!
Superior beings, when of late they saw
A mortal man unfold all nature's law,
Admired such wisdom in an earthly shape,
And showed a NEWTON as we show an ape.
Could he, whose rules the rapid comet bind,
Describe or fix one movement of his mind?
Who saw its fires here rise and there descend,
Explain his own beginning or his end?
Alas, what wonder: man's superior part
Unchecked may rise, and climb from art to art,
But when his own great work is but begun,
What reason weaves by passion is undone.